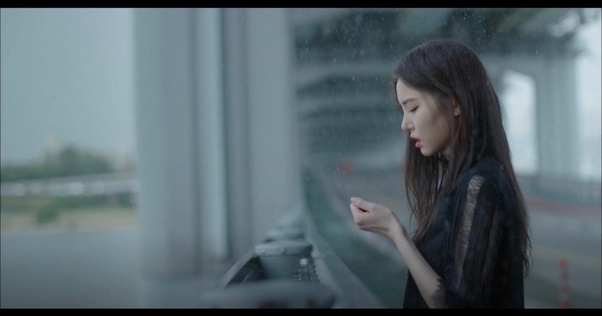 Obviously, the shows that are “made up” have plots that almost sound ridiculous, but let me share one story that I reluctantly share:

The precipitation was fierce. Not normal for the Pacific Northwest in the deep winter.

As I looked outside, I remembered the day I had visited my paternal grandfather in Incheon, Korea. We were sitting in a tiny shack made from leftover parts lying around in an abandoned local factory. You would think the strong monsoons in Korea would force it to collapse, but the dilapidated structure stuck around — just like my grandpa. “Hahruh-buji”, as we Koreans call the father of either of our parents, was just waking up from a nap. When I entered half afraid, he not only appeared jolly to see me, he drilled into me right away about who I was dating or if I was making enough money to survive along with a handful of other normal questions distant family love to shower you with.

Hahruh-buhji would yell at the top of his weakened and shaky voice with random inquires (some even befuddled me), but I listened intently out of respect. It was the respectful thing to do. However, all I could think about was how much his head shook.

“Byung-hee!” My mom raised her voice.

I must have been gazing. My mom interrupted my day dreaming and asked, “What you thinking?” which forced me to refocus on the fact I was sitting right in front of her.

I replied, “Do you know why Grandpa used to shake his head so much?”

Mom said, “It very unfortunate story. You not old enough now. So, tell you later.”

I immediately flipped back to her, “What are you talking about mom? I’m 38 years old! How old do I have to be to hear this story?”

She thought about it for a moment and realized I was right.

The first thing she did was tell me that I couldn’t tell another soul. Admittedly, it would be a promise I would break at least a dozen times. The story was too mind boggling to keep to oneself – it’s something you would literally read in an Amy Tan novel.

Mom started, “So, ‘Byung-hee’ (The nickname my family used to call me for anything. My aunt called me that. My cousin. The whole family), there was very sad story in your dad’s life. One reasons your dad acts that way he does is because of very sad night in his life. He will never forget it and I thought there was no way I could share with my children. It’s why I not tell you until now.”

Her words arrested my ears. What was she going to say? The truth was, my dad was a very cold man. He never said, “I love you” (to even my mom) and I couldn’t even remember the last time he told me I did anything right. He has always had short bursts of words and usually they were criticisms about how I conducted myself. His favourite lecture was probably telling me I was lazy; this beratement came from a man who worked up to 22 hours a day until the age of 75, surviving on barely any sleep. However, it was still hard to hard to hear – especially recently given that a good & respected friend of mine told me that a study he recently read cited that sleep was critical. He added an hour of sleep a night extra could translate into as much as a $60,000 USD annual raise. Logically, it made sense to sleep 8 hours. But my dad didn’t believe in much of anything except his own rules.

She continued, “Your dad used to live with 3rd sister.” My dad had seven sisters and one brother. I couldn’t even begin to understand how my grandma managed the household. Frankly, I think the chaos in the household was as bad as my grandfather running his pig farms.

“Your aunt dating a man from Ilsan your grandfather didn’t approve of. She tried many times convince him that he was ‘worthy,’ but grandpa hated him. Your grandfather was picky who he would let become in-laws. The man she was dating was never destined to be a part of the family. Despite this, she had a baby with the man. After birth, your dad eventually thought it would be good idea to tell your grandfather of news. He told aunt that “out of respect, we have to tell father.” Your dad bothered her, but your aunt make excuses over and over because she fearful of the problems. Your dad eventually persuaded her and they buy bus tickets to their hometown. A few weeks later, they traveling with cute baby to deliver “good news.” You could see how happy aunt was. Your dad also loves baby, even though you don’t know this. All of your relatives loved cute baby, except one.”

“After they arrived, they immediately take taxi to your grandpa’s house and thinking that everyone eat dinner together. Your grandma pushed your dad and aunt to come right away and eat some gal-bi – which was huge treat at that time.”

“It was late night. Do you see how hard raining outside? It just like that. Actually, it raining harder because Korea has much badder weather than here. And it was after dinner time which sometimes make your grandpa angry.”

“Your dad said that you could tell Ha-ru-buh-ji wasn’t happy when they arrived his house. He asked ‘What is that?’” And my dad immediately started to answer…but before he could say who the little baby was, your aunt interrupted. She said, “He’s mine. He’s your grandson, Appah (which meant “dad” in Korean).” He immediately looked outside and then stopped for a moment. It was silent for what felt like an eternity. He then turned back and asked, “What you going to do with him?” She said, “Of course I’m going to make him into great man, just like you daddy.” She just said that to appease him. He angrily replied back, “Great?! With that blood, how hell baby going to be great?!” he yelled back in Korean. She retorted back in the most respectful way possible with entreaties she thought would calm grandpa down.

“He then stood up and said, ‘Let me find something for ‘it.’ Confused, she agreed. He walked out of the room and started walk to the kitchen. He showed the baby to grandma briefly and then continued walking even further towards wind and rain which had been flying in. He eventually opened the backdoor to the backyard and stomped out. Your dad and your aunt could hear funny sound. So, they jumped up and started running after him. Your grandma stopped them and said, ‘He’ll take care him. Don’t worry.’ So, they reluctantly sat back down in the kitchen. She started to feed them some food since they were famished.”

“Minutes happened. Then it must have been at least quarter of an hour or more before your dad and your aunt started to wonder what going on. They could hear a big noise in the back while they eating, but grandma continued to make sure them that everything o.k. They even heard loud ‘whack’ which your grandma said ‘don’t worry. Something must have just fallen from dad’s shed. They had already travelled hundreds of miles out of respect. They could wait few more minutes “out of respect”

“Eventually, your dad decide to go and look for your grandpa and little boy. She followed. They saw footprints towards the shed where the door opened to the small house full of tools. They saw no signs of grandpa. There was small grove of apple trees next door to your grandpa’s house and they noticed someone in them burying something. They rushed over to find your grandpa.”

“With sweat falling down on his forehead and a angry smile on his face as if he really angry on mission, he noticed that they were coming towards him. He told them stay back and that he would be with them. However, your aunt couldn’t stop and ran up to him to find that he had buried her baby in the ground. Your dad did everything to hold her back while he and your aunt figure out what just happened. Dad was in shock, but possibly even feeling more regret that he encouraged her to ‘show their respects.’ There was no respect in what just happened. “

My mom finished with, “So, that’s why your grandpa shakes his head. People say, ‘He cursed. The spirit of that baby haunted him forever.” The little boy used all the rage in the air that day and all the sadness and combined it into an eternity of guilt.

“We don’t know all the other information of the story of how he may have helped the baby die, but I heard this truly sad tale and could only figure out because I never had good feelings about your grandfather. Do you remember the last time we all together and how I yelled at him before we left? I don’t like him!”

After my mom finished, my jaw literally dropped to the floor. It wouldn’t be the first time I would be in shock to learn about my family’s secrets.

I had a newfound and deep sorrow for him. For the first time in my life, I could finally sympathize and even understand why he struggled to talk to me – especially, as a loving father.

A few years later, my dad was in possibly the most comfortable and positive mood I had seen in for a very long time. It was a moment that seemed very ideal for asking him the veracity of the story that my mom had confirmed one time beyond the original time she told me in Tumwater.

Before we spoke about the details of the “old wives tale,” I had learned right off the bat that it wasn’t my father’s 3rd sister, but that of his 5th sister that he lived with in Seoul. Ironically, on this day where I would bring back wounds in my dad’s heart that I had no idea how permanent and deep they were, there was rain as fierce as that day in Tumwater and also the southern province city in Korea.

As I tried to ask my dad if the story was true, he eventually became grim and serious – so much so, he appeared to almost get angry. He turned to my mom and blurted, “How could you even talk about that?! Are you that stupid that you would open your mouth?” My parents weren’t the most loving towards one another, but in recent years, I had never seen my dad more caring towards my mom in terms of being a romantic older generation Korean man. But this digging and confirming of the truth was very disturbing to my dad and it had appeared the images of that night had literally rushed into his head after more than 50 years being dormant and possibly buried like the baby.

Perhaps the spirit of that newborn rushed into his head to haunt him and also remind us all that this story should be kept in the past? The truth had been revealed, but perhaps there was no need for the truth – at least while my dad was alive. Maybe my mom was referring to me “not being old enough” because 8 years earlier, my dad would have been even more hurt if we asked him similar questions.

After a few more tense complaints from my dad to my mom, I realized I needed to immediately cease talking about the tale. Eventually, I was able to shift the focus back to the original topic. I got my dad to focus on trying to find ways to reduce their auto insurance premiums. The thought of saving money could override almost anything.